When dogs bark out of fear, the result can be barking that is loud, incessant and extremely frustrating to humans within earshot. A fearful dog will often run away, turn and bark, and then approach, run away again, and turn and face what he is afraid of. The barking continues and his body language often shows fear as he crouches and tries to appear small. 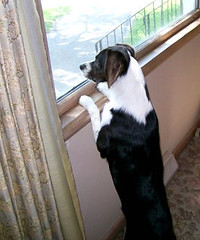 It is normal for a dog to bark out of fear occasionally and you may not need to do any training to change the behavior. But if the dog is afraid of a lot of things, you should begin a serious effort to desensitize him to his environment to curtail this kind of barking. A dog that has not been well socialized will often bark out of fear of ordinary household objects and sounds and usually is even more fearful outside of the home environment. Overcoming these fears can take time, so be prepared to work slowly and consistently to reduce fear barking. If the dog is afraid of thunder and lightning and barks continuously during storms, one management technique is to put the dog in a dark room where the sound can be drowned out by a fan or music.  Consult your veterinarian and read the eXtension article on thunder phobias for other treatment options.

While it is tempting to punish the dog for fear barking, punishment only adds to the dog’s fear. Do not use an e-collar, squirt bottle or any kind of negative training aid. Similarly, never push or pull the dog toward something it is afraid of.  And although it is counter intuitive, it is also important to not try to soothe, pet, or reassure the dog while it is afraid. The best approach is not to react at all to what the dog is afraid of. Your quiet demeanor will do more to reduce the fear than anything else. In some cases you can step between the dog and what he is afraid of (assuming there is no real threat or danger), which will often himsome confidence. If they come up behind you to see the feared object and you wait quietly, that may be enough for the dog to relax and stop barking. In cases where the dog is truly panicked and the barking is extreme, you will need to remove him from the stressful situation and begin a plan of gradual desensitization to reduce the fear and, therefore, the barking.

Desensitization of feared objects may be accomplished through flooding or through gradual acclimation. Flooding is intense or prolonged exposure to the feared object . However, flooding is traumatic and rarely works because a stressed dog shuts down and is unable to relax. A better approach is using gradual acclimation to slowly expose the dog to the feared object or sound from an ever decreasing distance and reinforce the positive reaction of looking but not barking. Use a clicker or a conditioned reinforcer to teach the dog that the behavior you want is being calm and not fearful. It is often helpful to teach the dog an alternative behavior and practice some fun obedience exercises or games at a distance from the feared object. When the dog is distracted by the training or other activity, he can gradually overcome his fear because a new response is learned in the presence of the feared object.

Socialization of Dogs and Puppies

Manage Cookie Consent
To provide the best experiences, we use technologies like cookies to store and/or access device information. Consenting to these technologies will allow us to process data such as browsing behavior or unique IDs on this site. Not consenting or withdrawing consent, may adversely affect certain features and functions.
Manage options Manage services Manage vendors Read more about these purposes
View preferences
{title} {title} {title}