Dropsy is a common but often fatal fish disease that causes distinctive raised scales pointing away from the body in an affected fish. Although used as the name of the disease, it is more accurate to say that dropsy describes the symptoms of the disease as it is due to the swelling caused by fluid accumulation in the tissues or body cavities of an animal. The actual cause of the swelling and of the disease consists of a variety of factors, including kidney disease, infection, and nutritional and environmental factors. It is the prominent swelling primarily in the abdominal region of the fish that causes the protrusion of the scales away from the body. This protrusion results in the pine cone-like appearance of the fish.

Swelling is a result of the fish’s inability to regulate its own fluids and ultimately its own bodily functions. Failure to regulate 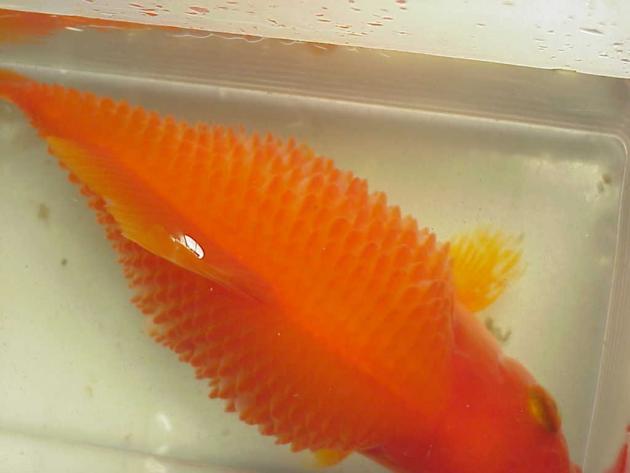 one’s own bodily functions results in a sharp decline in health. In fact, it is usually too late for a fish when the scales have begun to deviate from the body. Major swelling, typically indicated by the raised scales and enlarged body, suggests that the fish’s organs are shutting down. At this point, very little can be done, and it would be best to euthanize the fish, especially if it is not responding to treatment. Therefore, it is best to act immediately upon first signs of dropsy, such as lethargy and loss of appetite, by quarantining the fish. Isolating the affected fish from its tank mates decreases the chances of the infection being passed on.

Aside from the severe decline in health, dropsy is additionally difficult to treat because the origin of the disease is often difficult to determine. Numerous causes can be attributed to the deteriorating health of the fish. Viral, bacterial, and parasitic infections are the direct factors that can cause dropsy. Environmental factors, such as improper levels of ammonia, nitrites, and pH, can induce stress and weaken the fish’s immunity to infection. In addition, owners should consider and fix all the preexisting conditions that may have contributed to the fish’s susceptibility in order to prevent the recurrence of dropsy. Due to these varying factors alone, treating and preventing dropsy from reoccurring is a very challenging task.

If you have a valuable fish, you should consult with a veterinarian familiar with fish medicine or an ichthyologist in the diagnosis and treatment of this disease. Medical treatment is readily available in pet stores, but the efficacy of these products varies. Medications such as antibiotics, antivirals, and treatments for parasites can be used if the direct cause is known and if the fish is still in the early stages of dropsy. However, the early signs of dropsy are also early signs of many other fish illnesses, which can certainly complicate the administration of specific medications. In order to combat such issues, special medications are available that can treat a variety of illnesses simultaneously. Nevertheless, keep in mind that fish with full-blown dropsy not only need to be treated for direct and environmental factors but also for their declining health. Although the disease is difficult to treat, there are cases where fish have recovered from dropsy.

Without a doubt, the best treatment for dropsy is to prevent it. This means conducting the proper research prior to purchasing a fish and ensuring that the environment it lives in is within reasonable standards. This may mean purchasing pH indicators and water conditioners for ammonia, nitrites, and other metals in the water. Through proper research, appropriate habitat accommodation, and observation of the health and environment of the fish, an owner can raise an illness-free fish.

Manage Cookie Consent
To provide the best experiences, we use technologies like cookies to store and/or access device information. Consenting to these technologies will allow us to process data such as browsing behavior or unique IDs on this site. Not consenting or withdrawing consent, may adversely affect certain features and functions.
Manage options Manage services Manage vendors Read more about these purposes
View preferences
{title} {title} {title}